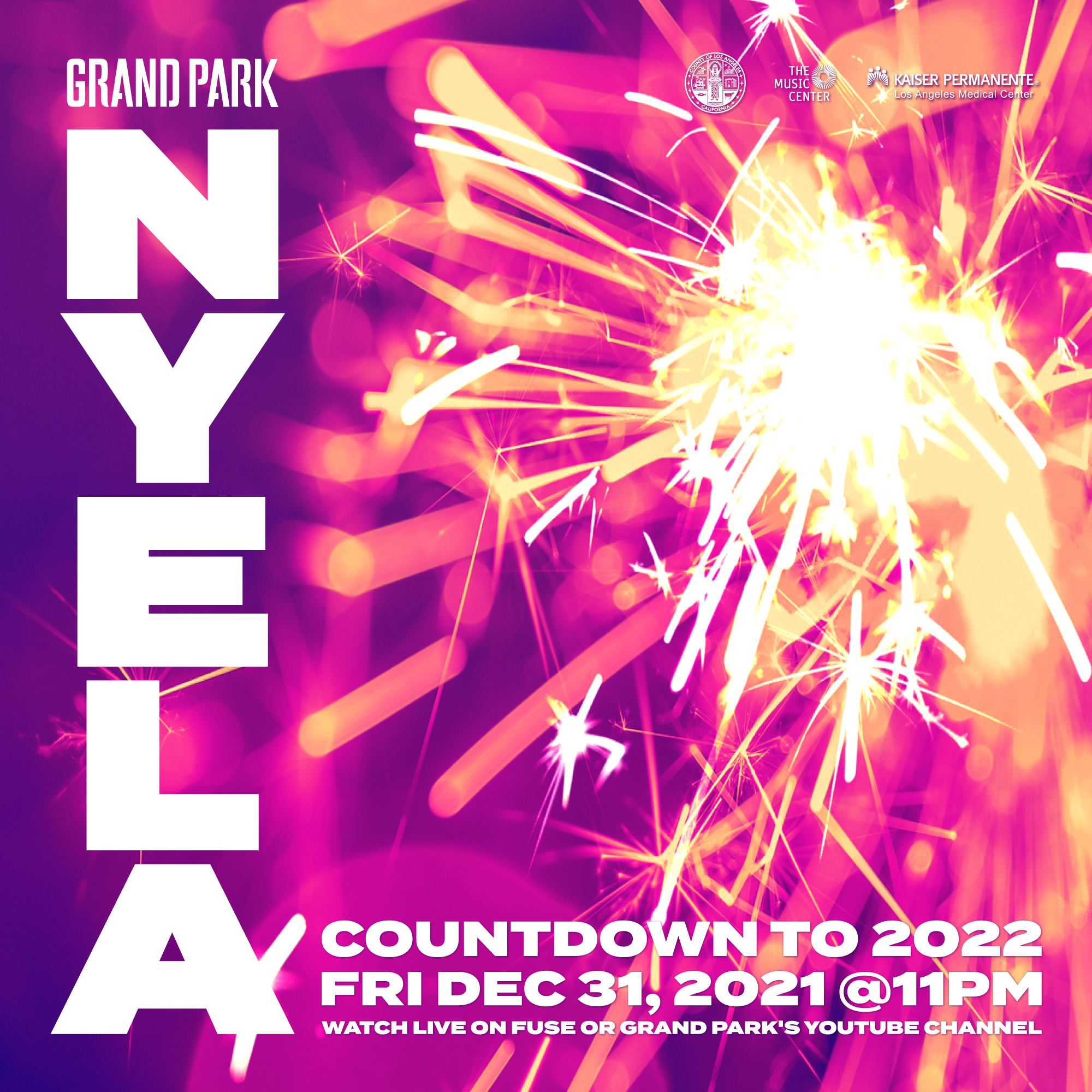 LOS ANGELES (December 6, 2021)—Grand Park’s NYELA, powered by The Music Center, will ring in the new year by honoring the resilience of Los Angeles County and, in particular, those who gave us hope during 2020 with a live one-hour special broadcast and streaming event. While Grand Park’s NYELA will be closed to the public this year, Grand Park will still hold a live event for a special by-invitation-only audience of City and County frontline and essential workers; the program, which will feature joyful musical performances and Grand Park’s signature video projection countdown, will be broadcast on Fuse and livestreamed on Grand Park’s YouTube channel, providing the opportunity for people around the country and around the globe to experience the park’s grand-scale New Year’s Eve celebration. In line with Grand Park’s commitment to featuring L.A.-based talent reflective of the “park for everyone,” Grand Park’s NYELA will feature a dynamic line-up of performances beginning with the AfroDominican rhythms of songstress Esty, followed by the R&B-influenced alt-hop beats of South L.A.’s DUCKWRTH. A Latin icon for alternative electronic music worldwide and known for popular hits such as “Mas,” “Hasta Quemarnos” and “Soun Tha Mi Primer Amor,” Kinky will close out the hour-long program with a high-energy set. Dropping dance beats in back-to-back DJ sets, Peanut Butter Wolf, founder of independent Stone Throw Records, and J.Rocc, one of the original turntablists, will keep the party atmosphere going between main stage performances. The celebration will culminate with Grand Park’s signature midnight countdown created in a new partnership with Xitelabs out of Calabasas, featuring an exciting showcase of stunning 3D graphics and light shown on the iconic Los Angeles City Hall building. The midnight countdown show will meet the special moment of ringing in the new year in person for the invited guests as well as for the larger home audience watching online with the themes of hope, perseverance, action, bravery, boldness, positivity and unity.

“With a special invitation-only audience and an event that everyone can also enjoy from home, Grand Park’s NYELA is our way of saying thank you to the many whose personal and professional sacrifices kept us safe. In partnership with the City and County of Los Angeles, these essential workers embody the resilience and heart found in all Angelenos that will carry us into 2022. This year’s celebration with Kinky, DUCKWRTH, Esty, Peanut Butter Wolf and J. Rocc also keeps with Grand Park’s tradition of presenting the best ‘homegrown’ talent, highlighting forward-thinking artists, embracing diverse backgrounds and helping to further connect each of us to one another,” said Julia Diamond, director, Grand Park. “Audiences, no matter where they are celebrating, can expect upbeat performances and dance floor beats—hallmarks of every Grand Park’s NYELA.”

Noted Fuse Media Head of Content Marc Leonard, “Grand Park’s NYELA aligns with Fuse’s mission of celebrating our blended America by showcasing emerging talent and amplifying their creative selfexpression. We are thrilled to once again partner with Grand Park to bring this New Year’s celebration to a national audience.”

About Grand Park
A vibrant outdoor gathering place, Grand Park is a beautiful public park for the entire community in Los Angeles County. With expansive green space for gatherings large and small, Grand Park celebrates the county’s cultural vitality and is host to community events, cultural experiences, holiday celebrations, and many other activities that engage and attract visitors from all communities. The 12-acre Grand Park stretches from The Music Center on the west to City Hall on the east and is easily accessible by Metro via the B/D (formerly Red/Purple) line to the Civic Center/Grand Park station. The park was named one of American Planning Association’s 10 “Great Public Spaces” in the U.S. for 2013. Working closely with the county, The Music Center is responsible for all operations and programming for the park. For more information, visit grandparkla.org. Follow Grand Park on Instagram, Twitter, Twitch, TikTok, Spotify and Mixcloud (@grandpark_la) as well as YouTube and Facebook(@grandparkLosAngeles).

About Fuse
is a Latino-owned, multi-platform entertainment company dedicated to documenting and celebrating our increasingly blended America through engaging and vibrant storytelling. With a portfolio of award-winning original content and a growing global footprint, Fuse strives to authentically reflect the world of its young and diverse audience, pioneering a multicultural and creative destination. The Fuse Media family includes Fuse, Fuse+, Fuse Backstage, Fuse Beat, FM (Fuse Music), Fuse Sweat, fuse.tv, and Fuse Content Studio, its in-house production arm, as well as a growing branded content and live events business.

Add your perspective and voice

Share your vision, feedback, questions and concerns with the Grand Park teams.